Cuban cigars have been the most popular cigar in the world for many years now. They are known to be some of the best tasting cigars and also some of the most expensive. With how popular they are, it is not surprising that there has been a rise in fake Cuban cigars being sold online. The quality of these fakes can vary greatly, but how do you spot them? This post will tell you how to identify if your Cuban cigar is real or fake so that you don’t get ripped off!

How To Spot A Fake Cuban Cigar

There are many different ways to tell if a cuban cigar is fake. But if you are in the process of buying a cuban cigar then we recommend you understand how to spot a fake cuban cigar so you don’t get scammed.

It is important to understand a few important tips about the anatomy of a cuban cigar before buying any cigars. The paper and band should not have any wrinkles or creases. They should also be smooth to the touch.

A real Cuban cigar will come with a label that has been printed on it, whereas a fake one might just have stickers placed onto them instead of being printed out. Inspect how tightly rolled your cigar is – a true cuban will always appear evenly wrapped which means there are no gaps between the tobacco leaves inside of it while fakes may leave some areas exposed in comparison.

Smell: if you think your cigars smell too good then they’re probably fake! Real Cuban cigars usually do not give off an overpowering scent as their quality prevents them from having strong odors like other brands of cigarettes

When you are in the process of shopping for high quality cuban cigars, we recommend that you only shop from the best place to buy cigars online. If you buy cuban cigars from authoritative retailers then you will never have to worry about if your cigars are fake or real. You can also read our best cigar for beginners guide or our how to smoke a cigar guide to learn more about what to look for in a high quality cigar.

Look At The Head of the Cigar

When reviewing the quality of a cigar, we recommend looking at the head of the cigar for signs of poor quality. Cohiba cigars, for example, are known to have heads that appear moldy or wet when you place them next to other cuban cigar (real cigars should always leave some kind of an outline).

Keep an eye out for cigars that burn too fast and unevenly. Real Cuban cigars usually take about 40 minutes to smoke while fakes can be finished within 20 minutes!

Look At The Symmetry of The Cigars

Before purchasing a box of cigars we always recommend that you review the packaging for any signs of low quality. Fakes will often have a cheap, flimsy box that is easy to open. Real Cuban cigars would never come in such an easy-to-open package! Cuban cigar boxes are typically sturdy and will have a noticeable weight to them.

Understand The True Price of A Cuban Cigar

The price of a cigar should always be the first clue as to whether it’s real or not. If you come across an offer for a box of Cuban cigars that seems too good to be true, then in most cases it is! We recommend researching how much cuban cigars cost and how they’re sold before making any purchases online.

The Color of The Cigar Ash

Is The Cigar Box Made Out Of Glass?

Is The Cigar Wrapper A Barber Pole of Intertwined Color?

A fake cuban cigar can have a wrapper that’s a barber pole of intertwining colors. This is how they are able to fool buyers into thinking the cigars are real because they look like an expensive Cuban cigar with their beautiful wrappers.

You should also be sure to check how much weight a fake cuban cigar has before buying it, as most high quality Cubans will feel heavier than those fakes ones! You want something that feels heavy in your hands and isn’t easily crushed between fingers or on contact with surfaces– this could mean you’re holding onto a genuine Cuban cigar! 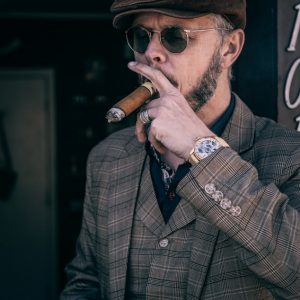